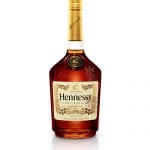 You will be receiving the limited edition Felipe Panton Hennessy