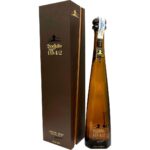 *THIS BOTTLE HAS A PREVIOUS ENGRAVING THAT CANNOT BE CORRECTED*