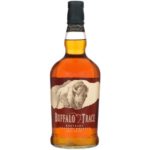 Made a the same distillery as Blanton’s for half the cost!