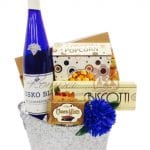 Dusko Blu Reisling in a metal container with popcorn, chocolates, and cookies